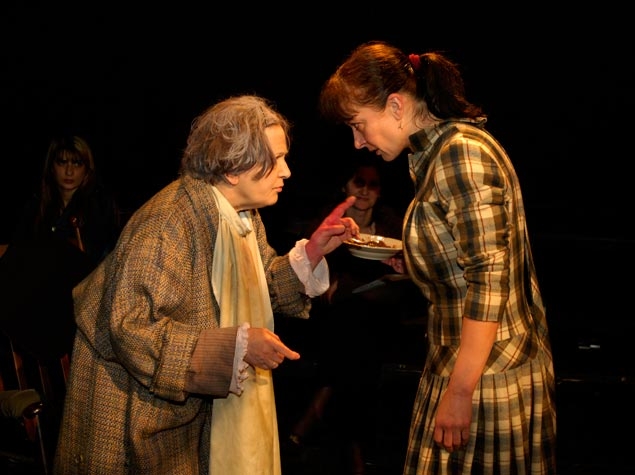 A few years ago, I had the pleasure to see one of Andreea Vulpe’s plays staged at Toma Caragiu Theatre in Ploiesti. What was expected to be an ordinary mise-en-scène, with us the audience seated in front of the stage, turned out to be a lovely surprise: our chairs were placed on the scene.

The setting was minimal, intended to reinforce the sad picture of poverty and clutter taking over our characters’ lives. The focus was instead on the connection between the heroes of the story and the audience sitting alongside them. A few pieces of furniture and us the spectators were about to witness a drama with funny accents here and there, a typical Broadway play.

The author of the play is the scriptwriter Martin McDonagh born in London of Irish parents. The writer emphasizes a less exposed face of a less thriving, unhappy, helpless Ireland. His story might be fictional; it might as well be based on real facts. It doesn’t matter, after all. What matters indeed is that his text is shocking, as it takes guts to bring on stage the drama of a family living in a poor, godforsaken village in the ever-expanding Ireland. And still…

The play seems to tackle a common theme, a cliché – the toxic relationship between a mother and her daughter. Or vice-versa.

The more the story unravels before our eyes, the more we become part of it. The tendency is to empathize with the daughter Maureen (here Oxana Moravec), as her mother Mag (Lucia Stefanescu Niculescu) is not the helpless old lady she pretends to be, despite her health issues that make her entirely dependent on her daughter.

In her forties, Maureen is still a virgin, and she already suffered a nervous breakdown. She looks after her sick mother that somehow manages to dominate her entire life. Even when she seems to find a way out of this ordeal, she ends up fooled by her mother over and over again.

The antithetic Maureen, played by the charming Oxana Moravec, is both fascinating and frightening. This role brings her the award for Best Actress at the National Studio Festival in Pitesti, in 2008.  Mag or Lucia Stefanescu Niculescu is a mind-blowing combination of evil and sweet, a shape-shifting character that switches from the role of a torturer to the victim. Ray (Bogdan Farcas) is a demagogue with unfulfilled dreams, neurotic, and violent. Pato (Ioan Coman), Ray’s brother and Maureen’s suitor is the mirror of kindness and modesty. The two males that seem to be Maureen’s way out are both charming and funny.

The flawless acting of the characters makes this performance anything but a cliché.

The play is not being staged in Ploiesti anymore, but you may still see it at Odeon Theatre. Just keep an eye on their official website or their Facebook page.