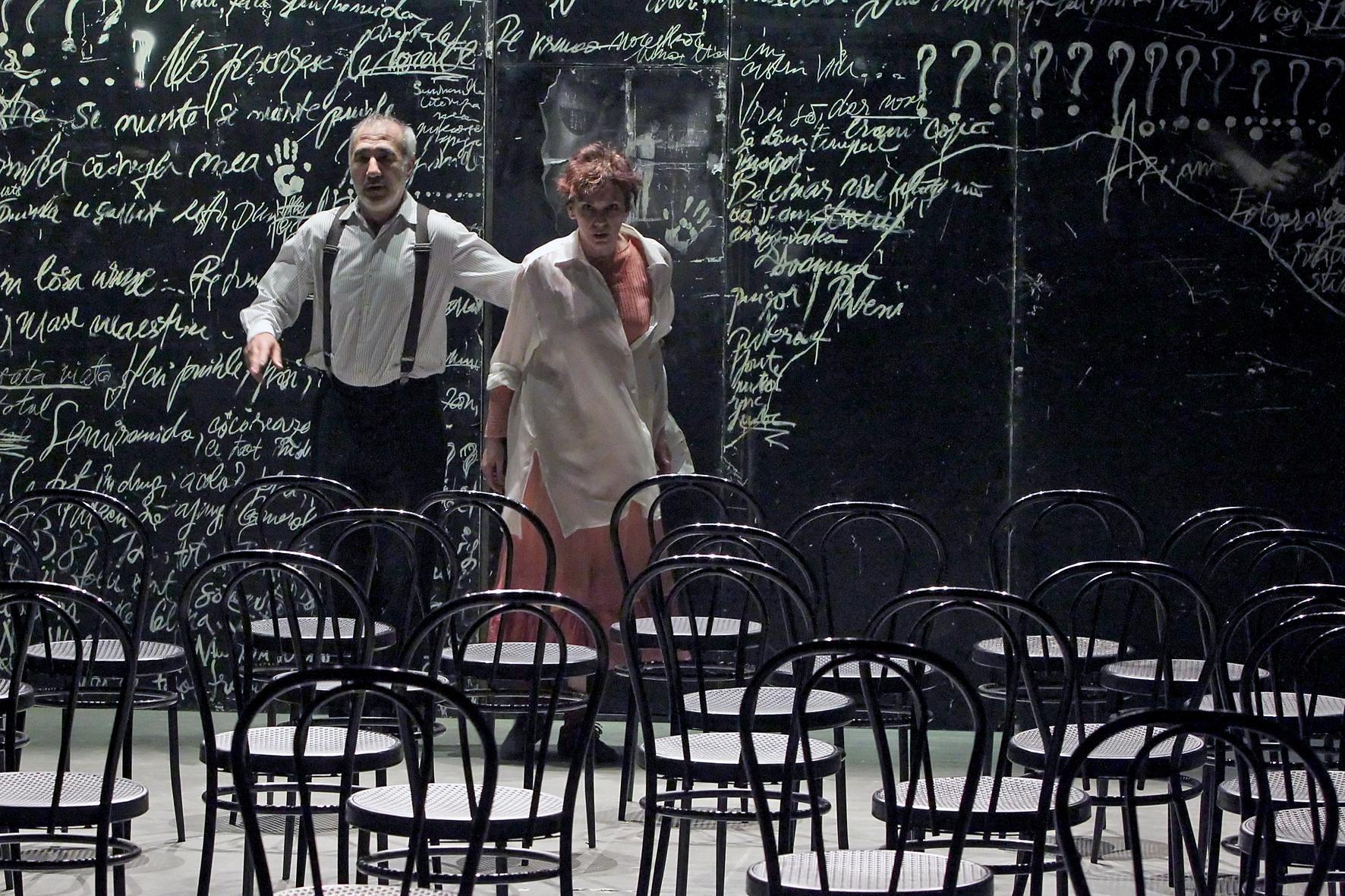 From time immemorial until Renaissance theater plays were staged to conjure up kings, to recall their heroic deeds, their victories, and so the people cheered. At the same time, clergymen, who were the only ones who knew how to read and write, played an essential part in the education of the mob. Some critics say that church and monarchy together controlled what was reaching people’s ears or eyes. In other words, the theater was, along with other ecclesiastical speeches, a tool of manipulation.

Modernism gives us Ionesco, an interwar mutineer who, just like Samuel Becket, is a promoter of surrealism, criticizing dissenting allegiances, beliefs, ideologies, and actions. Ionesco popularized the Theater of the absurd, a courageous and hard to digest form of art. He is a daredevil, a keen observer of the darkest corners of humankind.

The Chairs is a metaphysical creation of significant weight that brings together Oana Pellea and Razvan Vasilescu, two unique actors that play the role of an old married couple living from memory and through fantasies. The set design shapes up an imaginary universe of the two older people living in complete social isolation. You almost believe that they’re the only survivors of a natural disaster or something like that.

Dealing with Ionesco, we know from the start that we’re in front of a seemingly simple story, full of absurdities, an absurd tragicomedy. Instead, the author unravels the purgatory of humankind. The two actors humanize the ludicrous text. The play becomes incredibly touching due to the flawless interpretation of the two.

Semiramis and her Baby are a metaphor of the intrinsic self of each and one of us, a representation of what Ionesco’s cynicism only outlines. What first seemed senseless – the distorted discourse of the characters, the awkwardness, the grotesque – shapes up and starts making sense.

The director Felix Alexa declares that this play ‘is probably Ionesco’s most metaphysical play. It incessantly dredges up our existence that we think of or that we desperately want to think of as meaningful, full of important events. Ionesco unceremoniously demonstrates to us that we struggle in vain, while he reveals an image of a world searching for an identity and for a purpose to justify life. A delusional quest. We are all that is left from humanity, but with such leftovers, one can still make a very good soup, as the old man in the play says. Cynicism to the rescue.’

The Chair is an invitation to self-analysis and contemplation, so those of you who like deep thinking will enjoy reflecting upon profound ideas: Who is Semiramis? Who is Baby? Are we supposed to take their suicide as such, or is it a metaphor for the decay of humankind? Were they really 94 and 95, or is age only a metaphor for premature aging of our souls?

That said, I invite you to see a ‘rough’ unparalleled play performed at Bulandra Theatre.

The Chairs, by Eugène Ionesco