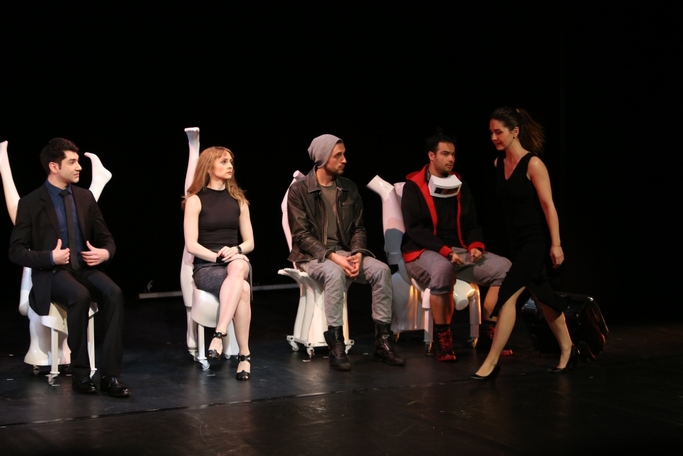 The 21st century is about convenience and speed. Technology is in continuous deployment, we have created robots to do our work, process automation is flourishing, robots learn to speak and already fake feelings frightfully well.

We write code; we try hard to comply with specific patterns ignoring our real needs, we get bored quickly, we live with untold trauma that damages our inner self, we think of ourselves as unworthy of love, incapable of actually living it. We speak less while inside us there’s an unbearable noise that ages us prematurely.

That is what The Placebo (D)effect is about alienation, isolation, and the illusion of accomplishment in an artificial space. This theme is indeed pretty standard, but the work of the 9G (New Generation) breaks any pattern. It is not a typical theater play. The creation team describes the play as “three stories, three narratives, and a reunion like a therapy session, where the only psychologist is theater.”

The text, the entire concept is not based on any book or movie; it is the collective work of some artists belonging to the new generation of actors. A generation that most probably has performed theater plays in another lifetime, as they are convincing, very in control.

The play tells ordinary life stories: a game addict suffering from social anxiety creates his own parallel life through VR. A pair of glasses connected to technology offer Virtual Boy the perfect life. In his world, he is respected, appreciated, worthy. His friend David carries his burdens. Extremely emotional and caring, David tries to convince his friend to reconnect with reality.

Mara and Bogdan play the role of a married couple that fights all the time. Mara slides from the hysterical wife to the independent feminist, to her husband’s partner, and so on. Their dialogue is delightful.

Bi_Anca has a split personality – she is either kind or savage. The passage between the two moods is unnoticeable, and her mimics and gesture contribute to the shaping of her ego, her egos, actually.

During the entire performance, the actors danced, sang, accompanied by a trick of lights. And the set design consisting of five chairs is also relevant for the theme of the play: the five chairs are entirely white, shaped like contorted pieces of the human body, another symbol of the innermost feelings of the characters and the distorted lives of all those affected by technology.

That being said, I invite you to see this satirical and moralizing performance at TNB. It is time well spent.