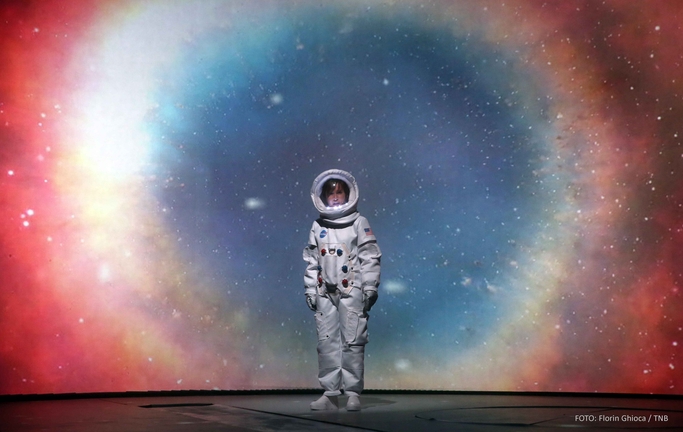 So, do aliens exist after all? The author of the play UFO Ivan Vyrypaev thinks so. As a matter of fact, he claims to have seen aliens, and that is why he started researching the topic. How? He looked for people who have experienced the same sensation and who were willing to share their experiences. And so he put those testimonials together in a sort of documentary. To make every narration realistic, he made sure that those statements belonged to serious, reliable, and educated people because when you tell people that you have seen aliens, they might not believe you or think of you as mad.

The director Bobi Pricop explores with a lot of courage and precision technology. He uses special effects to potentiate the mysticism of the journey of the six characters. The images which have contributed to the restoration of the setting in which every aspect tells a story, the reflection of the faces of the characters, the music, the movable stage make the mise-en-scène a bit Sci-Fi.

UFO does not tell the story of some Martians trying to invade Earth, nor does it resemble Arrival, the movie where a researcher tries to communicate with aliens. And I can assure you that it cannot be seen as derisory either. It is rather about some purely sensory perceptions of the narrators describing the most important encounters of their lives. What they felt was unique and unrepeatable. It all happened when they were living their ordinary lives. All of a sudden, something happened – something undefinable, without a name or an explanation. That experience came with a whole new state of mind, a state of calm, clarity, relaxation.

When did peace become strange?! Our minds are so loud that when something silences them, we perceive it as unusual. The mysticism of the play invites us the audience to auto-examination and urges us to try and find that unique and tempting feeling within us. Also, we have some conclusions to draw, some lessons to learn from every testimonial that includes a subtle message that we have to decipher. After decoding the message, we leave the auditorium more at peace.

The ending brings us Ion Caramitru, who performs a very sensitive monologue only this time without using any 3D effects.

This mini-documentary-monologue-movie-case study is still being staged at TNB. You shouldn’t miss it, as it revolutionizes not only due to the exciting theme it tackles but also to the special effects that contribute to the shaping of that theme.