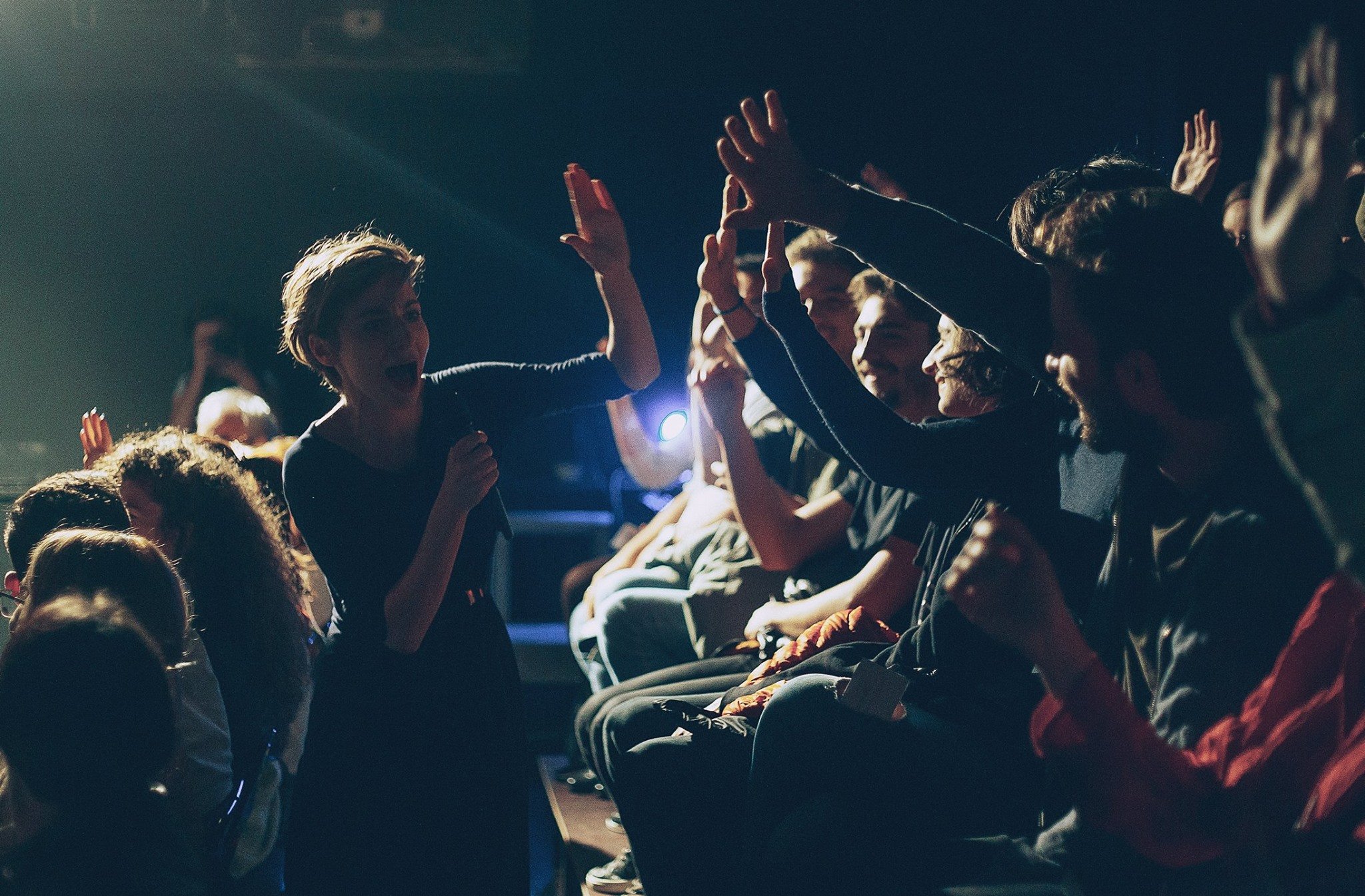 … are only a few of the million little things that Ana writes down, hoping that her mother would regain her zest for life.  Aged only 7, she tries to make her chronically depressed suicidal mother see the beauty in life.

The play examines a very delicate subject – depression. Funny thing; it may seem a depressing theme. On the contrary, the show is vivid and interactive, as the audience is invited to take part in the story like in an improv show. A story told at unteatru by Denisa Nicolae.

Every brilliant thing is an atypical story. Duncan Macmillan avows that he did not want to create anything pathetic. He only exposes the little wonders of the world that we all need to hold on to sometimes to be able to move forward. Because, as he declares, ‘I stand by that. Life is f***ing difficult.’

Light intensity adjustments support every mood of the character. Also, the pick-up in the setting was electrifying. Any music aficionado will shake his head and tap his foot. The records played by the actress take you to another world. You take a break from soul-searching and just hear the music. And you shake your head. And you tap your foot.

Outside the auditorium, the hallway walls were covered with cards with ‘brilliant things’ left by previous spectators. My favorite: Drinking water when you’re very thirsty.

Denisa Nicolae was amazing. She played the role of a 7-year-old, then of a teen, then of a matured woman. In the meantime, she made sure to keep the audience engaged, and somehow, she managed to turn those 90 minutes into something both funny and emotional. Just like in Lungs, the actress managed to make us go through an emotional roller coaster.

At each stage of her character’s life, the actress wears her jumpsuit differently, she ensures to illustrate every change with a gesture, to keep you interested and curious for more, while deep down inside of you, there’s a battle going on.

Most of us know how to treat a migraine or a toothache, physical pain is pretty common, and in most cases, treatable. Yet we refuse to talk about depression, as it still is seen as a whim, a self-induced state, and nothing more. Not to mention suicide, this sin that no god of any religion can forgive. The play aims to revoke this stigma and in exchange, make people face reality: more teenagers aged 15 to 29 take their own lives. Not in the least, it encourages us to balance life’s hardships with its brilliant things.

Every brilliant thing urges us not to be afraid or ashamed of being sad. According to a line in the play, “If you live a long life and get to the end of it without ever once having felt crushingly depressed, then you probably haven’t been paying attention.”

The show is part of the awareness and anti-stigma campaign that Vanner Collective started in 2017 with the support of their medical partners: ARPP, Depressive.ro, Atlas Help, and Equilibrium Association.

The play has been turned into a mini-documentary on HBO. Below a teaser:

„Every Brilliant Thing” by Duncan Macmillan